skip to main | skip to sidebar

Hey all. A minor update here. I thought Id show the parts needed for connecting the Deff rolla on the battlewagon. 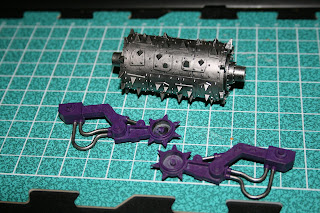 Here are the parts. The connector arms are actually two parts glued together. I did not think of showing the parts seperated. 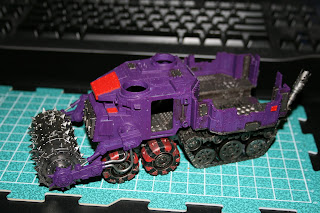 And here it is on the battlewagon. Be sure to dry fit the parts together so you can still the battlewagon down without the deffrolla being too far down. You do not need to glue the actual rolla part to the arms. It adds some length to the model. When you glue it to the battlewagon do it one side at a time and use the rolla part so the arm sits where you want it and it will also hold the arm in place while it dries.

Hey. I did these models as a test of color scheme and to see how different they would look. 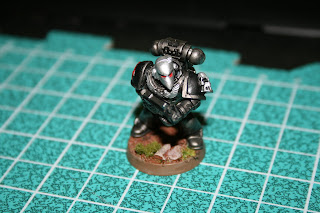 This is a Silver Skulls Tactical marine. Its a boltgun metal body with a heavy wash of badab black. The chest eagle and helmet is mithril silver. the Silver Skulls chapter is an old chapter that has been around for a while. 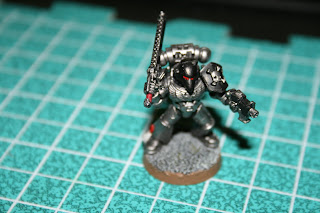 This assault marine is from the Iron Knights Chapter. They are thought to be a Imperial fist successor. This color scheme is black shoulder inset and helmet and a boltgun metal body. The body is not washed at all and the chest eagle is the same color as the body. The Shield on his shoulder is from a Assault Terminator kit. I trimmed the back nob off of it so it sits flush on the shoulder pad trim. 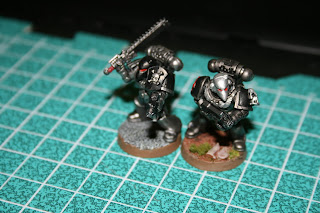 And here are the two marines together. Each has a distinct look and the difference in bases also makes them stand out separately.
Well That is it for now. Until next time.

Hey everyone. Its been a while but this next section of the battlewagon is done. 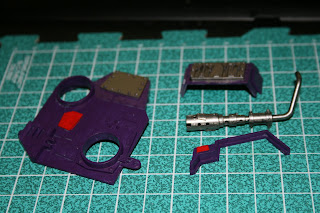 These are the parts used for this section. 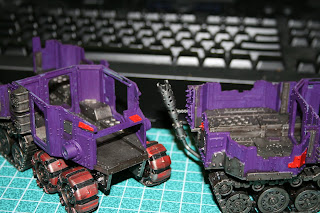 Firstly for the front you want to put this part on. It sits inside the two sides so be sure to dry fit. The exhaust on the back is easy enough. When you assemble the exhaust be careful to make sure it lines up with the points to connect with the battlewagon 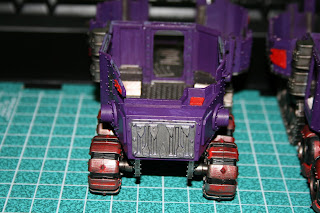 This part slides onto the front of the battlewagon. 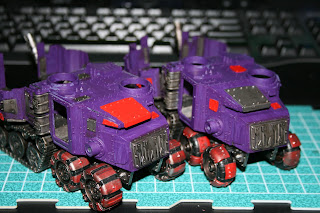 here the top was added. I washed the metal bits with devlan mud and badab black after attaching them to the model. Once the model is fully done i will touch up the paint jobs a bit and weather the model.
Until next time...

Hey everyone. Recently completed another Crusade era Loyalist Dark Angel Terminator. This one is a Librarian. Now Fluff aside about Librarians in Legions, I wanted to include a full command staff in my collection. I am happy with how he turned out. 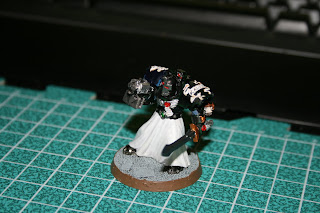 I gave him 2 of the DA dreadnought leg plates with the scroll work as it fits the theme. 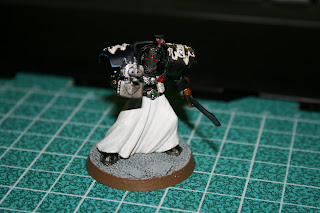 The head is a Maxmini helmet and the legs are from Microart Studios. I think they work well to make the model stand out.
That's it really for now. Just wanted to share the model as I am happy with its posing and look. Until next time..
Posted by James at 7:19 PM No comments:

Hey everyone. This is the next part I did for the battlewagons. 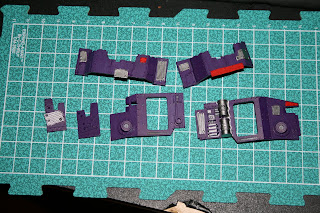 Here are the parts needed all painted up and ready to go. 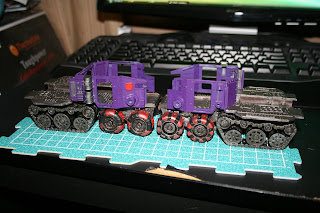 I started with the front and used plastic glue to glue the sides on. Be sure you dryfit first. The reason I used the plastic glue is because you get a bit more time to move the part around before it fully sets. 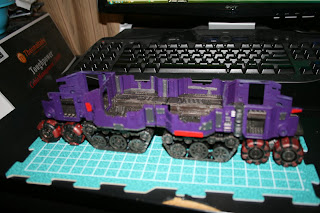 The next step was the back side panels. They are asymmetrical just like the front so you cant put the wrong side in the wrong place. However again always dryfit your parts together. 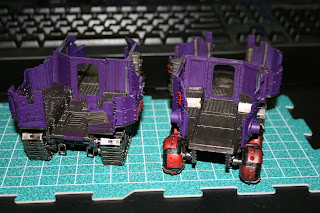 The last step was the back plates as you can see on the left battlewagon. They go a specific way as well. The left back plate is what a exhaust will attach to on the battlewagon.
That's it for this step. They are painted the same way I said in other parts. Again the weathering will happen after the model is fully assembled. Until next time.

Hey everyone. Thought I would post this guy up here as I finished him the other day. Basically I decided to relaunch my Deathwing as Pre-Heresy as I do love how the terminators were don in the artwork for it. I do also like the looks of Pre-Heresy Dark Angels even though it is just black. I'm starting from new with new models so the Dark Angels I have already will stay post heresy in there cool green, black and bone colors. The First Model I did for the new Crusade era Deathwing is a chaplain because the model is fantastic. 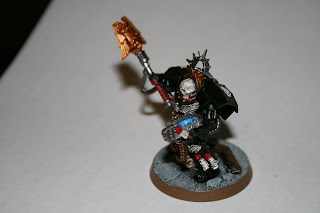 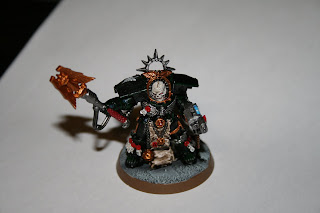 So there he is. I am happy with how he turned out overall. His Parchment loin cloth thing turned out better then I thought it would. The shoulder pads are Ironclad Dreadnought leg plates. The Crozius arm is a Thunderhammer arm with the hammer head removed and a dark angel bit added to the top. The combi-bolter is from the terminator librarian blister and the arm its attached to is a stormshield arm. Some greenstuff work to make the two mesh was required.
I highlighted the armor with Dark Angels green. I saw this done before and I really liked it so I tried my best with it. I kept the edging/highlighting dark. Also The pictures aren't the best. I am making an effort to clear some space and set up a mini wanna be photo booth for the miniatures. That will take some time though.
Now I know that the model has an imperial eagle on it in the back and I left it. Maybe he was given an honor by the emperor during the crusade? Who knows. Also there are 2 little crux terminatus type crosses on him. As they are not the standard Crux in look I figured these Templar type crosses would be fine to leave. And as for the combi-plasma... well they are the first legion and plasma has been seen in the novels and art work so its not unreasonable.
That is it for this guy. I really like how he looks. Instead of making my own shoulder pads I'm going to go with standard dreadnought leg plates for the rest of the army for the most part. Until next time...
Posted by James at 1:31 PM 11 comments:

Hey everyone. A bit delayed but here is the next part of the Battlewagon build. 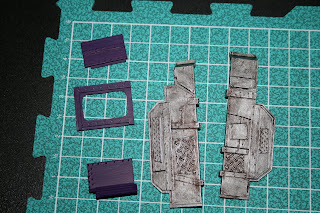 Here are the parts for this part of the build. They are painted up but the metal parts are not washed yet. Once attached to the rest of the model I wash the parts. 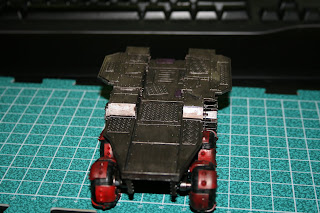 Here are the metal floor plates attached. These must go on first in order to put the purple parts above on. After it was glued in place I washed the floor plates with devlan mud to match the rest of the model. 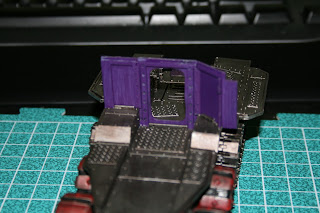 And here it is done. I started with the middle part and then glued the sides on. Now There is still some grey showing through and that is alright. This is just a rough base coat to get the majority of the coloring done. As parts of the battlewagon start to become closed off ill add finishing touches to the purple. Also I will be weathering the purple after the battlewagon is fully built.
Until the next one..